Have you ever heard of a double waterfall? Learn about these magnificent feats of nature and where you can find them in Iceland.

Though small, Hjálparfoss is an incredible place, often missed by tourists on tours of the nearby Golden Circle. The serene surroundings showcase the power of this double waterfall in all its glory. Impressive basalt cliffs stand tall around the falls basin, making for a dramatic photo for budding photographers. After all, when are you likely to see two stunning waterfalls in one place again?

What Is a Double Waterfall?

As it sounds, a double waterfall, often called a twin waterfall, is simply a pair of waterfalls that are situated closely together, perhaps ending up in the same water source but at the end of different rivers.

One particularly interesting part of Hjálparfoss is its name. Directly translated into English from Icelandic, the name means ‘help waterfall’, an unusual term for a waterfall in any language. The name stems from the ancient history of Iceland, where people would travel the nearby Spendisandur route on foot or horseback across the rocky, mountainous, and treacherous landscape of Iceland. This small, double waterfall was the first place that provided fresh water to weary travellers, a welcome sight after an otherwise dangerous trek over Iceland’s mountains. 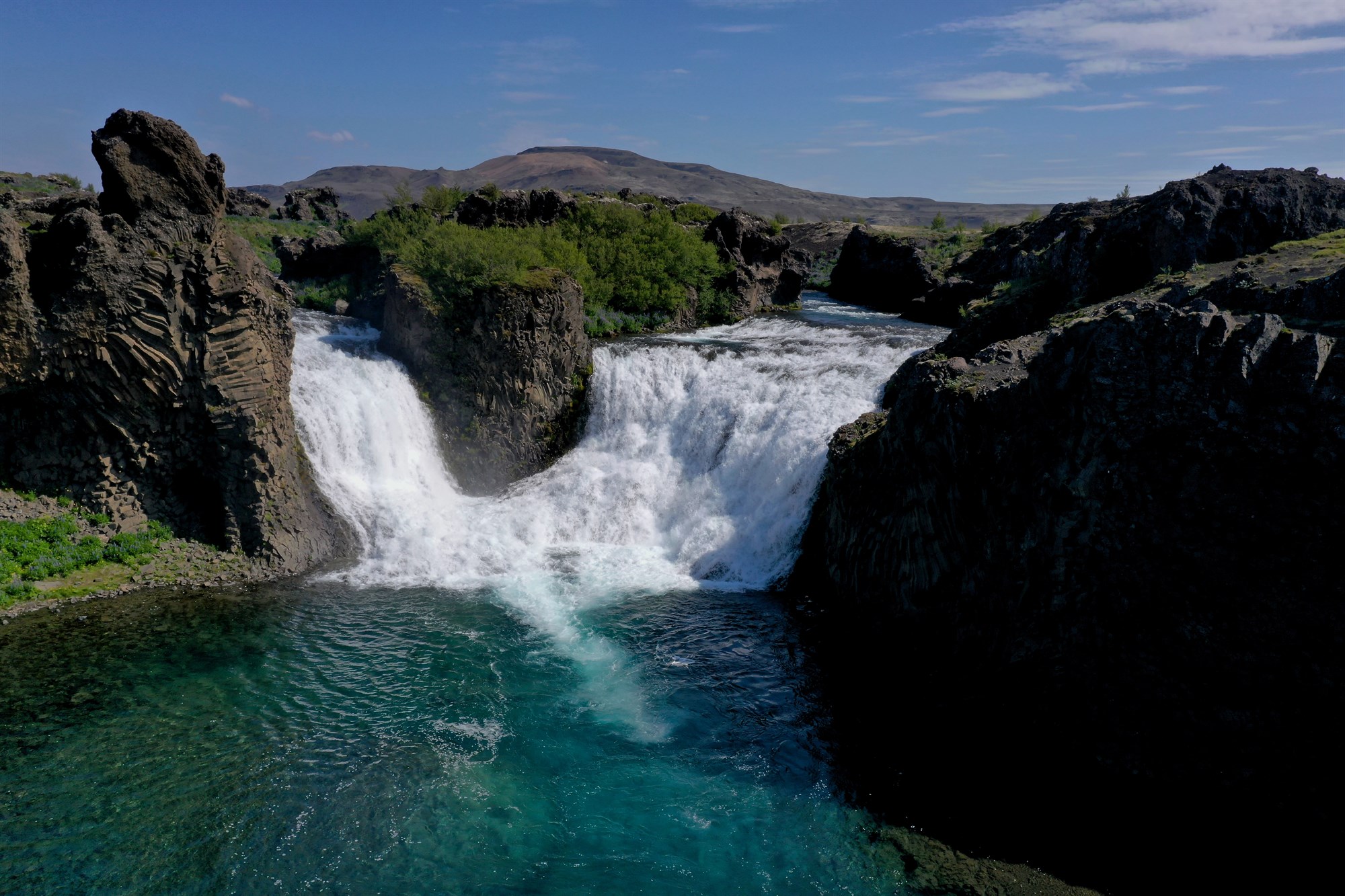 How To Get To Hjálparfoss

You can rest assured that the path to Hjálparfoss is considerably less dangerous nowadays. The paved, well-maintained road makes travel a breeze, so you can visit the double waterfall with ease. The waterfall can be found off of Road 32, which stems from the famous Golden Circle route. If driving the Golden Circle, Hjálparfoss is around 30km from the Secret Lagoon at Flúðir. There is a small car park set back some 600 metres from Road 32, signalled by a small sign - careful not to miss it on your trip!

What Is There To Do Nearby?

Gaukshöfði lookout can be found just minutes away along route 32, offering stunning panoramic views across the valley of the Þjórsá river. On clear days, you can see Hekla volcano from this point, a great place to grab some photos on your Icelandic tour.

A replica of a Viking farm also stands near the site of the double waterfall. Constructed based on ancient ruins, this turf-roof farmhouse opened in 1977 to educate visitors about the lives of ancient Icelandic settlers. The former manor farm, Stöng in Þjórsárdalur, is thought to have been abandoned after being destroyed in the Hekla eruption in the year 1104.

As mentioned, Hjálparfoss is also near the Golden Circle, meaning you can visit Hjálparfoss on your way to or from some of the most famous locations in the country.

When To Visit Hjálparfoss?

The truth is there is no real bad time to visit the double waterfall at Hjálparfoss. The green surroundings in the summer sun, colourful flowers in spring, or even glistening snow in the middle of winter - Hjálparfoss is an incredible place throughout them all.

To ensure you can fit in Hjálparfoss and everything else you want to do and see on your Iceland trip, why not hire a car with SAD Cars? Find a great deal for a quality rental vehicle.