Things to do in Iceland in October, November and December

Things to do include RIFF, Imagine Peace Tower, Iceland Airwaves and of course Christmas

October, November and December mark the end of fall (October) and beginning of winter (November and December). There are a few events during these months in Iceland plus of course the biggest one of them all, Christmas. Lets check them out, shall we?
Reykjavik international film festival, RIFF, starts in late September and lasts through the beginning of October. The 11 day festival takes place in several movie theaters and explores various themes and countries that differ each year. RIFF can be a great place to spend the evenings during October at events such as a midnight screening in a swimming pool. There are even QandAs with several of the directors where you can pick their brains.
The Imagine Peace tower is lit on October 9th each year and turned off on December 8th. The IPTower was set up in Reykjavik by Yoko Ono in memory of John Lennon and his message of peace. The tower is on Videy island on the Faxafloi bay and is only accessible by a boat. However, the light beam is visible in most parts of Reykjavik and has become an important fixture in the lives of the locals during the time it is lit. Yoko Ono was made an honorary citizen of Reykjavik in 2013, she comes to light the tower each year on October 9th.
The dates are no coincidence, they are John Lennon´s birthday (9 October) and the day of his murder (8 December). The tower is also lit up during Christmas and New Years (21-31 December) as well as on certain dates in February and March.
The Iceland Airwaves music festival is one of the biggest events in Reykjavik every year. Thousands of people attend the 5 day music festival where upcoming and exciting international bands on the verge of success are mixed with Iceland's new and established bands.
Concert goers can choose between several different venues, varying in size and shape. But what makes Airwaves even more interesting are the off venue shows that pop up in bars, cafes, stores and pretty much everywhere in downtown Reykjavik during the festival. Many of the bands play several sets only one of which is actually on the festival itself. So if you were too late to grab tickets to the actual music festival, you can still enjoy great shows all around Reykjavik.
Christmas in Iceland
The preparations for Christmas in Iceland formally start on the fourth Sunday before Christmas. From that first Sunday and until December 24th at 18.00 (6pm) Icelanders are enjoying the Advent with its many traditions. Lets have a look at some of the more Icelandic ones. 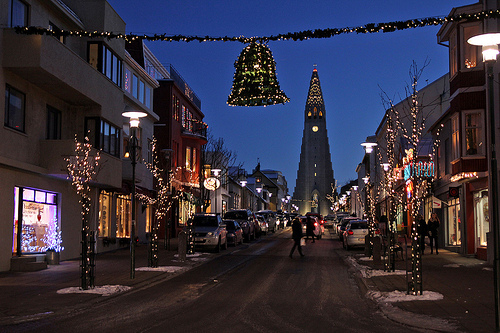 Photo by Heather on her travels.
December 21st is the shortest day of the year, on that day you can expect about 3-4 hours of daylight. The best part about Christmas are the various forms of lights that light up the dark days. People decorate their houses and businesses with all kinds of lights. They put Advent lights in their windows and light Advent circles (for a lack of a better word) with 4 candles, one for each Sunday during Advent. Everywhere you turn is cozy and bright, it is the best!
Of course, there are some fun traditions revolving around food. The most known Christmas food is most likely Laufabrauð (Leaf bread) which has been made in Iceland for hundreds of years. Many families meet up and make the bread together during the Advent, other buy them ready at the store. Each bread is decorated with different forms making each one unique. They are delicious with butter (although lets be honest, what isn't?). 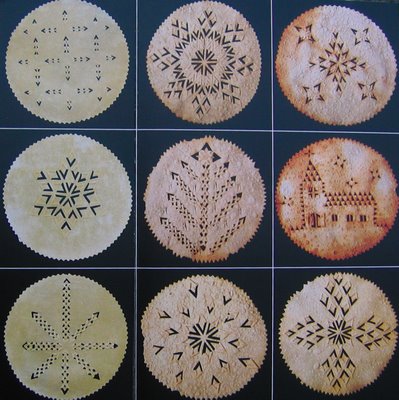 Photo from Iceland.is
Icelanders have their share of funny Christmas characters. Our 13 Santa clauses, or Yule lads, start showing up on December 11th. Historically, the Yule lads were stealing pranksters, but they have grown nicer over the years. Now they are funny, singing guys in red suits that leave presents in kids shoes, that they have left on their windowsills. If the kids do not behave they will get a rotten potato in their shoe! The Yule lads have dreadful parents, Grýla and Leppalúði, which live up in the mountains. Grýla was known for coming to get kids that weren´t nice back in the day, she would put them in her bag and take them to the mountains, all kids in Iceland are scared of her. They also have the Christmas cat that used to come and eat people that would not get a new piece of clothing before Christmas. Yes, it is brutal, we know!
Þorláksmessa (literal translation: Saint Thorlak’s mass) is on December 23rd. It is a custom to eat cured skate (pretty much rotten fish) on this day and the awful smell of the skate is everywhere; in restaurants and people´s homes. So, don´t be startled if you smell something bad that day, it is not you. ;) Many Icelanders enjoy walking around the downtown area that last night before Christmas to finish buying some last few presents and get into a festive mood. This is a great night to walk around downtown and get into the Christmas spirit with the locals.
Finally, Christmas starts at 18.00 (6pm) on December 24th. Most Icelanders enjoy a Christmas meal followed by the opening of presents which have been sitting under the Christmas tree all day. Christmas day and 2nd day of Christmas are often saved for enjoying relaxing time at home with the family or going to Christmas gatherings.
New Years’ eve
Icelanders celebrate the new year with fireworks and parties, the night is full of magic and traditions. The night is actually called Gamlárskvöld or Old-years-eve which I find much more fitting, don´t you agree? :)
Typically, people will meet up for a festive dinner. Many people enjoy the tradition of going to a Brenna, a bonfire, after dinner. There are several Brennas around Reykjavik and in all towns out in the country. People shoot small fireworks, sing old songs and watch the fire burn. Another huge tradition in Iceland is the Áramótaskaup, an hour long show on the national TV channel RÚV where comedians make fun of all kinds of things that have happened during the year. During this hour almost no one can be seen outside, everybody is inside watching. Right after the show ends at 23.30(ish) people jump outside to start exploding fireworks where most people save the biggest ones for midnight when the new year is here. People hug and say Gleðilegt nýtt ár to each other.
If you are in the area of downtown Reykjavik then the best spot to go to is by Hallgrímskirkja church, the view over Reykjavik is spectacular, we promise it is a fireworks show like no other you have ever seen. If you are somewhere else.
Hope you enjoy Iceland during the fall and winter months of October, November and December.
Bye for now.
Signy