Hunting the Northern Lights in Iceland

The Northern lights in Iceland

The Northern Lights are a magical sight. They float through the sky, popping up wherever they want and however they want. They almost always appear to be green but can switch colors to white and purple at a moment’s notice. And sometimes they dance! There is nothing like the sight of them dancing on the sky, it is impossible to describe to someone who has not seen them. 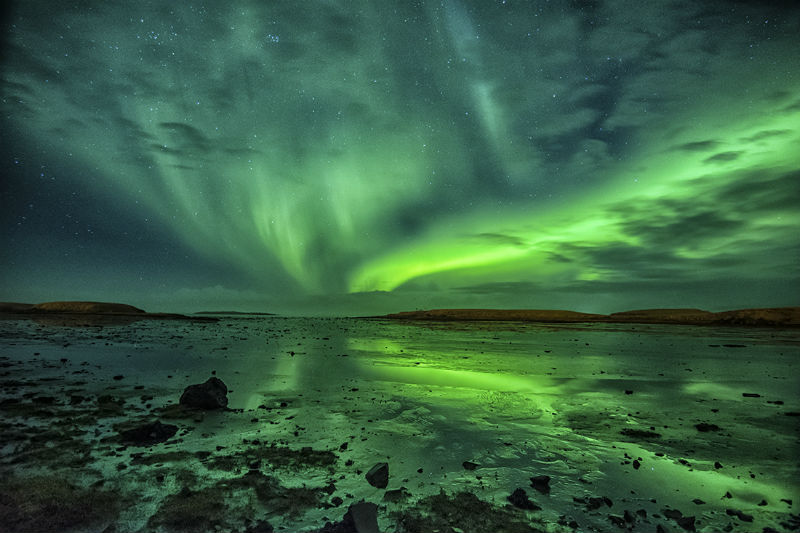 Photo by David L. Smith near Höfn in south Iceland
If you are planning on being in Iceland in the winter months (October – April) I suggest you try to see the Northern Lights. The best chance of them showing up to charm your socks off is in cold weather. Obviously, the sky cannot be cloudy as then you will not be able to see them. Also, they are most visible where there is as little light pollution as possible so stay away from Reykjavik and other towns.

The Icelandic met office has a Northern Lights forecast website where you can check the chances of seeing them and where it is most likely that they will be visible. So now you can basically hunt them, and if you catch them you will be rewarded with a magnificent show like no other. 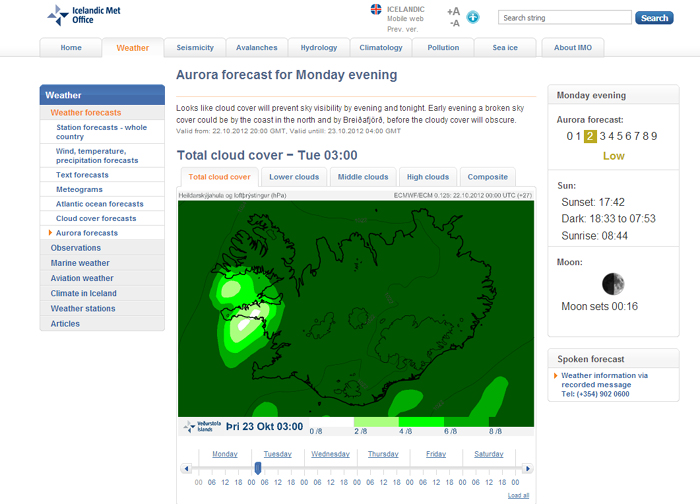 The Icelandic met office gives you three weapons to base your hunt on.
At the top of the site there is a text forecast for the time period you have selected. Ready it, it´s usually very informative.
The map of Iceland called Total cloud cover shows you the probability of seeing clouds in different parts of the country. We want to avoid the dark green, white is good here, people. As you can see 3.00 AM on Tuesday 23 October was not a good time for Northern lights hunting anywhere in Iceland.
Lastly, you have the Aurora forecast in the top right corner. The higher the number, the better your chances are of seeing some of that aurora. Like the Icelandic met office says on the site: Even grade 2 (low activity) can be beautiful and grade 3 (moderate) can be dazzling. So make sure you don´t back out because of a grade 2.
There are some other cool features too, such as the slider underneath the map. Move the slider or click on a specific time to see the forecast during different times in the week. You can use this to find the best night to go hunting. You can also see actual times of sunset, total darkness and the sunrise on the right side of the map which might come in handy in some circumstances.

So the key tips for possible Northern lights hunters are

We would love to see photos of successful hunts. Please share Northern lights photos with us using the hashtags #sadcars and #northernlightsicelandhunt.
We have also put together more tips on hunting the northern lights, you can check that out by clicking the related blogs below.
Happy hunting guys!
Signy