Driving the ring road in Iceland: The Eastern fjords

Tips about roads, sights and other good stuff from Höfn to Grímsstaðir 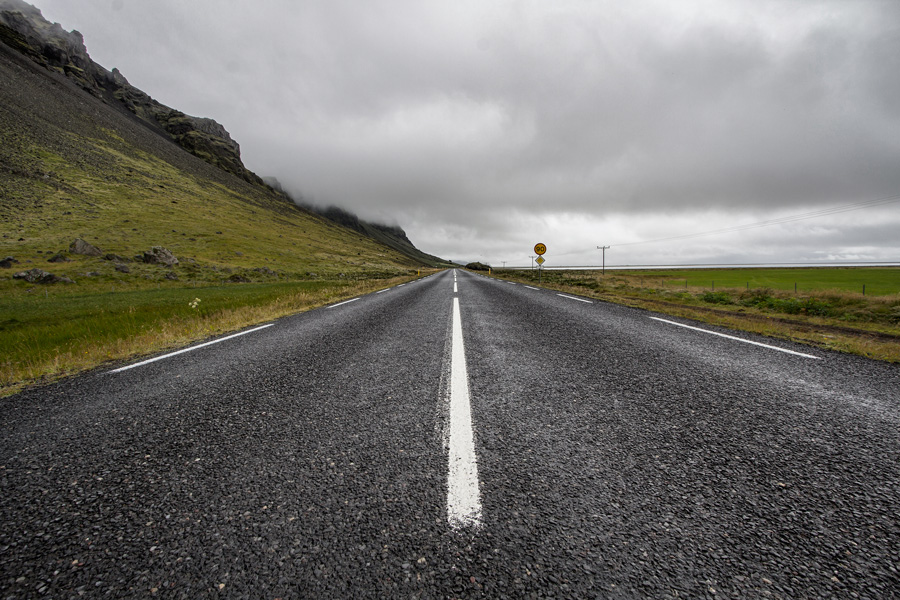 About the Driving the ring road in Iceland blog series

Driving the road nr.1 or the ring road in Iceland is great fun and the beautiful sights on the way are sure to take your breath away. We have decided to blog about driving on the ring road in an attempt to clarify for travelers what they might expect (with emphasis on the driving part). These blogs are not a list of all the sights you can see in the area but rather an idea of how you might expect the roads to be, road sections to watch out for and how the weather can affect your trip. So put on your virtual seat belt and let’s continue our journey on road 1 in the mystical Eastern fjords of Iceland. 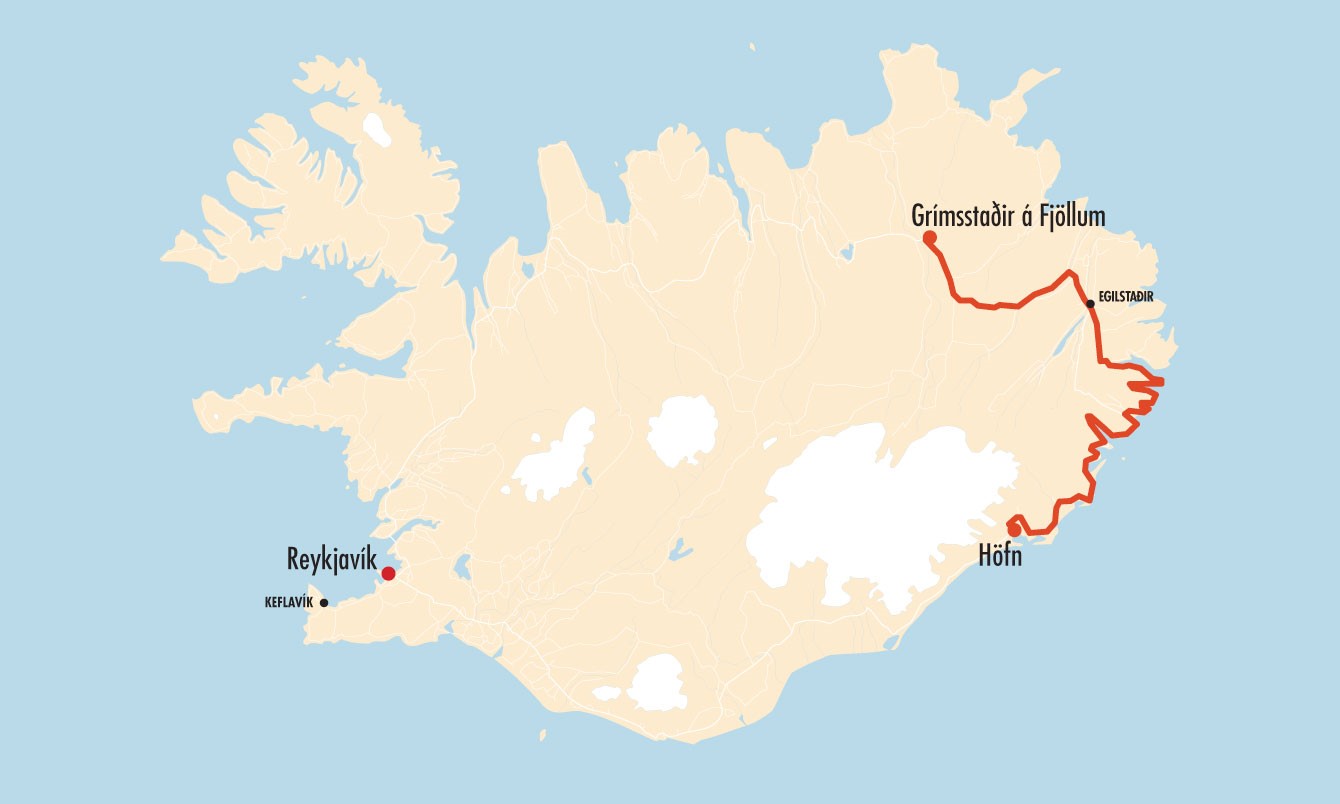 The Eastern fjords, from Höfn to Grímsstaðir.
Driving time without stops about 5 hours (ring road only).
Asphalt road and gravel roads (road 1 only).
Safe for all cars to drive (2wd and 4wd).
For the purpose of this blog, we have decided that the Eastern fjords are from Höfn to the farm of Grímsstaðir á Fjöllum in Northeast Iceland. The Eastern fjords are a magical place with beautiful sights but, unfortunately, some bad roads. Parts of the ring road in the area are gravel roads and many secondary roads are gravel as well. An upside is that the area is not as popular as the South coast so you might experience less traffic here. The ferry Smyril Line sails docks in Seyðisfjörður, usually on Thursday morning, so there might be heavier road traffic when the ferry is docked.
One other thing worth mentioning before we take off is that the Eastern fjords are home to the Icelandic reindeer. It is not uncommon to see reindeers on or beside the roads so be aware of them in the area and above all enjoy the view. 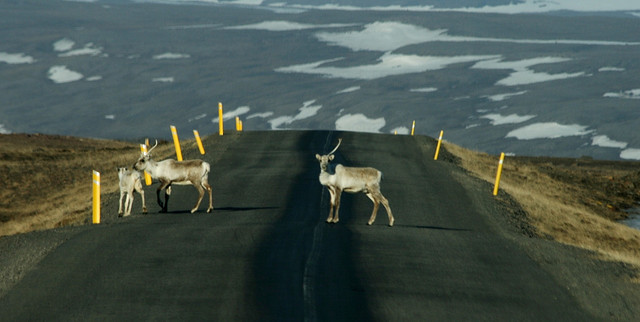 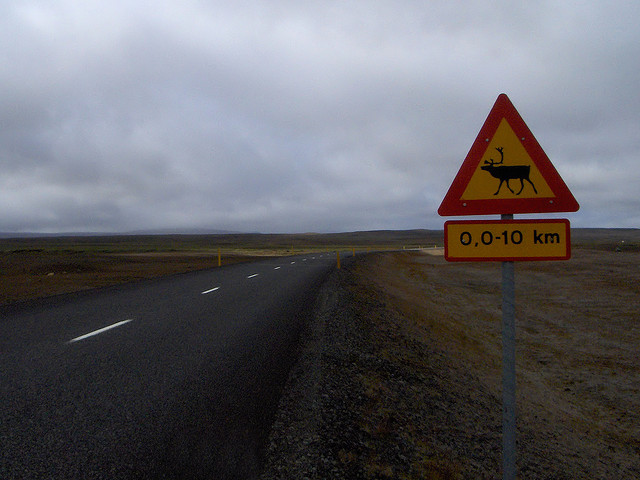 We start our journey in Höfn. The town of Höfn is the lobster capital of Iceland so we highly recommend you do not leave the town without munching on some lobster. The ring road ahead is mostly by the ocean and on lowlands, we will not cross mountains for a while. Soon you will reach the shortest tunnel in Iceland, about 800m long. The speed limit in the tunnel is 70 km/h.
We reach the first stretch of gravel at the bottom of Berufjörður. This is only a short approx. 8km stretch of good gravel, nothing to worry about. There was a stretch of gravel road called Hvalnesskriður and Þvottárskriður between Lón and Álftafjörður. There are several pictures online on Google and in blogs describing the rather questionable condition of this road. However, it has been improved dramatically and is now an excellent asphalt road. 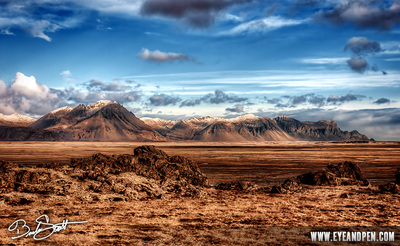 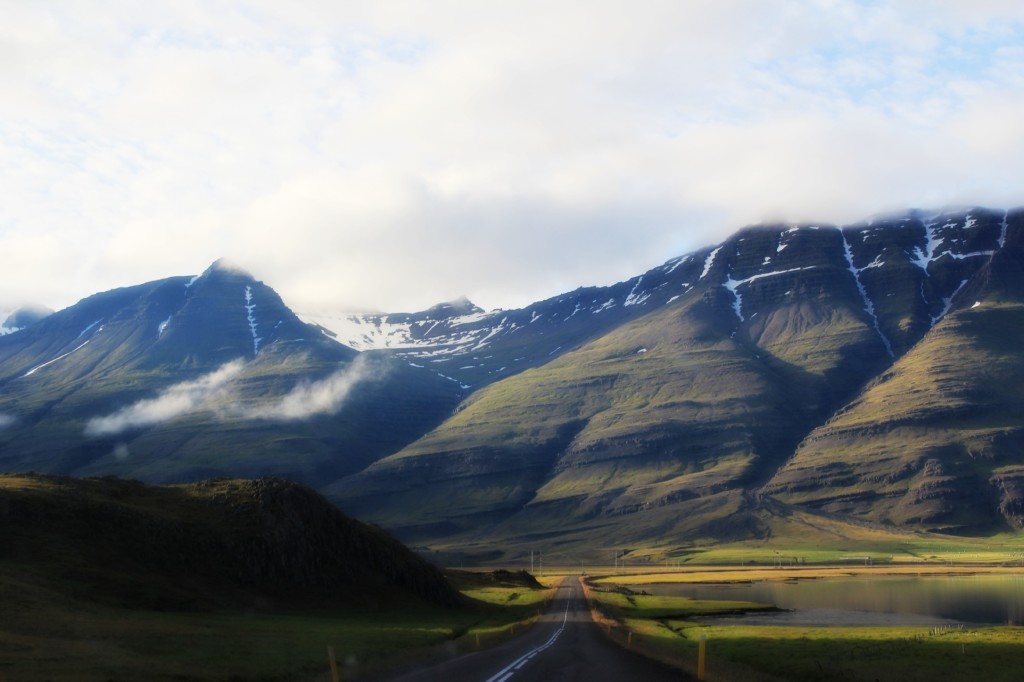 Photos taken near Höfn, first by Eyandpen.com and second by LazyTravelers.com.
After Breiðdalsvík the ring road continues straight to the town of Egilsstaðir which is the biggest town in the Eastern fjords. If you choose to take this route then you will drive Breiðdalsheiði mountain passage which and part of this road is gravel as you can see on the Google map below.
Gravel road on Breiðdalsheiði on road 1 by Google maps.

Driving on parts that are not on the ring road

However, if you follow the ring road then you will miss out on...well most of the Eastern fjords. So we will take a right off the ring road and check out the towns of Fáskrúðsfjörður, Reyðarfjörður and Seyðisfjörður. There are other towns you might want to visit such as Stöðvarfjörður, Neskaupsstaður and Eskifjörður but we will not talk about them specifically here.
You might have noticed that many of the towns have the ending –fjörður which means fjord. The towns are therefore simply named the same as they fjords they are in. They are usually nested in the bottom of the fjord with mountains all around which often makes for a very scenic drive in to the town and nice view from the town.
Fáskrúðsfjörður has a connection to France because of a number of French ships that fished there back in the day. The French museum in the French hospital in Fáskrúðsfjörður is well worth a visit. There is a 7-8 km tunnel between Fáskrúðsfjörður and Reyðarfjörður. The speed limit is 70 km/hour and there is no fee.
Reyðarfjörður is a town that has grown in the last few years after the huge Kárahnjúkavirkjun dam was built. There is a good, paved road up to the dam for those that are interested.  Reyðarfjörður was the home of the second largest allies base in Iceland in World war II because of the good location and harbor. The town has built a wartime museum dedicated to that period of history. There is also a beautiful ravine in Reyðarfjörður called Geithúsárgil that is worth a visit for bird lovers and hikers. 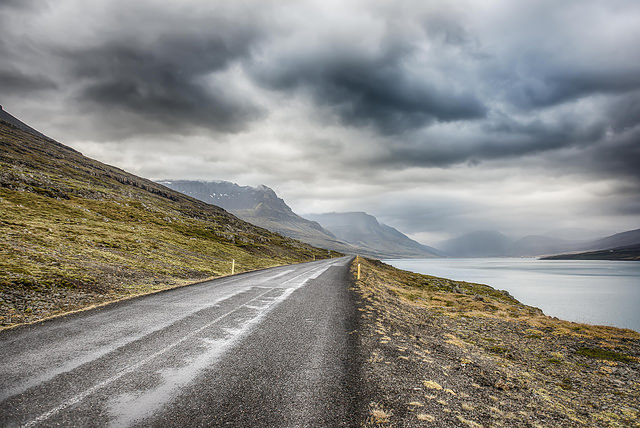 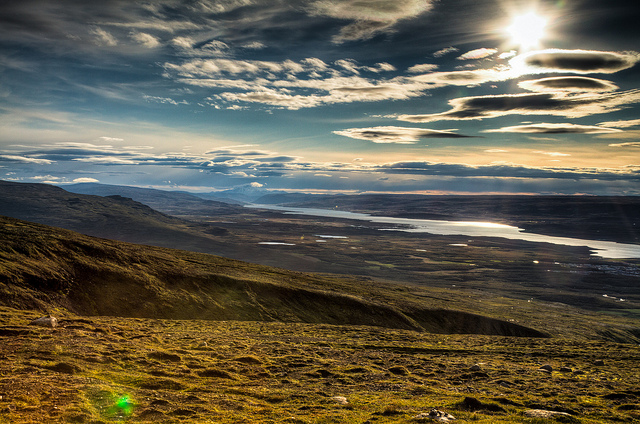 Photo of Reydarfjordur fjord by Kyle Mortara and Egilsstaðir and Lagarfljot Lake by Jonathan, respectively.

Back on the ring road, on the way to the town of Egilsstaðir

We have chosen to drive the mountain road from Reyðarfjörður to Egilsstaðir to get back on the ring road. This road is good in summer, spring and fall but conditions can be bad in winter time so make sure you check the forecast and road conditions before traveling there in winter. So, we are back on the ring road again and traveling in the area of Egilsstaðir (the town of Egill). Egilsstaðir is the biggest town in the region and is located by the great Lagarfljót river. If you have time we suggest you drive up to Hallormsstaður forest (well as close to a forest as you will get in Iceland) and enjoy a stroll and possibly a picnic. If you are lucky you can spot the Lagarfljót worm on the way, a legendary lake monster that has been spotted in the river since 1345 and even recorded on video in 2012.
We recommend you visit the town of Seyðisfjörður which is connected to the ring road from Egilsstaðir over Fjarðarheiði mountain passage. This town is well known for its beautiful surroundings and buildings, a very cute little town. It has become a home for many artists and boasts its own art festival for young people as well as a number of galleries and cafes. In the movie The Secret Life of Walter Mitty, Ben Stiller's character skateboards down the road to Seyðisfjörður, check out a few seconds from this scene below. For more photos check out our friends' at For91days great blog about Seyðisfjörður.
The road 1 from Egilsstaðir to Grímsstaðir is a mountain road where you will travel through very rugged landscape, black sand deserts. The road is paved and a good road but it is a good rule to check weather and road conditions when you know you will be traveling over mountain roads. The view to Mt. Herðubreið, the queen of the North, is spectacular (if you are lucky enough to see it).
The road to Möðrudalur is a 4x4 gravel road. There is an old farm at Möðrudalur and today they have an old church and a small store there which is only open in the summer. It is the highest inhabited place in the country and has been inhabited since the first settlements arrived in Iceland.
If you have a 4x4 car and the roads are open you might want to drive inland to Herðubreiðarlindir which is a beautiful green oasis in the black sands of the north part of Vatnajökull national park. When this blog is written, this area has been closed due to the eruption of Holuhraun but will most likely be open again once the eruption ends. 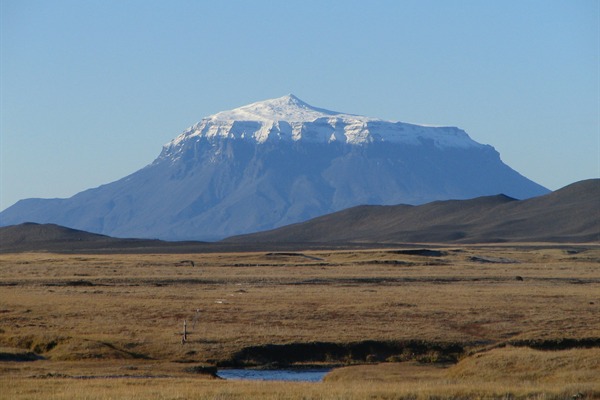 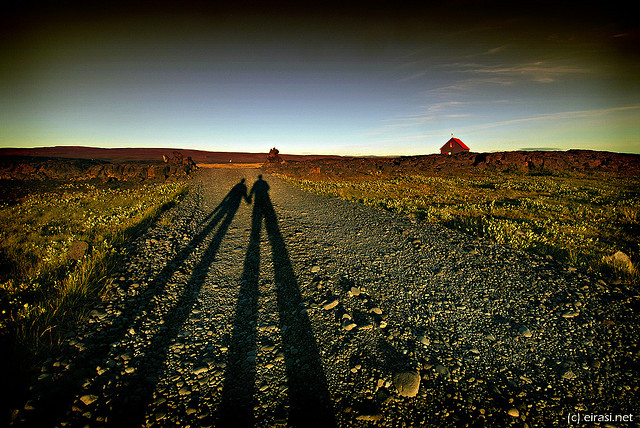 Extra tips about driving in the Eastern fjords

There are many restaurants, cafes and accommodation options in the various towns in the Eastern fjords. You will find cheaper supermarkets in Reyðarfjörður (Krónan) and Egilsstaðir (Bonus).
There are no restaurants or stores from Egilsstaðir to Lake Mývatn unless in Möðrudalur valley in the summer. Skjöldólsfsstaðir is the last gas station before you reach Lake Mývatn so make sure you have enough gas and snacks for this part of the way.
We remind you that the speeding limit is 90 km/h on asphalt roads and 80 km/h on gravel roads. The speeding limit in towns is 50 km/h. The police frequently checks speeding in the area and there are a lot of speeding cameras so we advise you to respect the speed limit.
Also, please be aware that off-road driving is against the law in Iceland as it causes real and irreversible damage to the Icelandic nature that could take decades to heal. Please do not drive off roads even if you see tire tracks!
Well, we have concluded the second part of the ring road. We hope you enjoyed the ride. We will continue our journey through the spectacular North Iceland soon, read that and other blogs in the Driving around Iceland series below.
Until next time,
Signy