The Road from Reykjavik to Hekla

If you are driving the road from Reykjavik to Hekla Iceland you won’t be disappointed. An off road driving route and the Hekla volcano, well worth a visit.

If you are visiting Iceland and plan on hiring a car to explore the country, then somewhere you might be planning on heading is Hekla. Even if you haven’t heard of it before, it is well worth including in your plans.

The road from Reykjavik to Hekla Iceland is a pleasurable drive, including some off road driving in the Hekla region for those looking for a little more adventure. Hekla actually refers to the active volcano located in the region, but the surrounding area also shares the name. We have put together a guide to driving the route and what to expect from Hekla Iceland.

How Many Active Volcanoes in Iceland?

Iceland has more than 20 volcanoes that are considered active, with 18 of these erupting since the human population of the island. 6 different volcanoes have erupted in Iceland since the year 2000, with the most recent volcanic eruption taking place in 2021. It’s easy to see how Iceland gets its reputation of ‘a land of fire and ice’!

Although you might have seen the recent volcanic eruptions from Fagradalsfjall volcano in 2021, Iceland actually has over 30 volcanic mountains. Some are, of course, dormant but around 20 of these are still active and considered likely to erupt at some point in the future. However, this isn’t necessarily a cause for concern as there have only been 5 reported deaths in the last 100 years in relation to the volcanic eruptions. Hekla volcano last erupted in the year 2000 but is a great site to visit and is only a 2-hour drive out of Reykjavik. 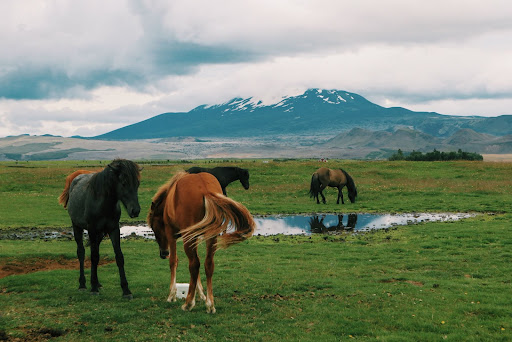 Driving from Reykjavik to Hekla

If you are planning on driving to Hekla from Reykjavik then most of your journey will be straightforward and on major paved roads out of the capital. Take Route 49 out of the capital before joining Route 1 to Landvegur. You can then follow this route most of the way to Helka, passing through the small town of Selfoss on your way. After a short drive out of Selfoss you will need to turn onto route 26 towards Helka which, although a smaller road, is still paved and easy to drive at this point. Shortly after passing the Fossabrekkur waterfall you will then need to head off road.

If you haven’t driven off road before then you might want to take extra care. Drive slowly along this route as it is a gravel road and should only be driven in a 4X4. You can follow the signs along this road to find parking for Hekla volcano and, if you are feeling confident, you can drive up to the base of the mountain. On the other hand, you might prefer parking a little before this point and enjoying some picturesque walking some of the way up the mountain.

Things to See and Do at Hekla

You might be wondering what you can actually expect to see at Hekla and if it is just the volcano itself. There are actually more things to do in the region other than the volcanic activity. It can be worth spending some time at the foot of the mountain in the Thjorsardalur valley region. While you may have seen a few on your journey, there are several waterfalls at the base of the mountain with some breathtaking scenery.

There are also plenty of walks and trails to take around the volcano but you should be aware that these can take quite some time - it can take anywhere from 4-8 hours to hike around the volcano itself. There is also a visitor centre to find out more information and you can find the ruins of an ancient viking farm amongst the waterfalls at the base of the mountain.

There are lots of things to see and do around Iceland outside of the capital in Reykjavik with hundreds of waterfalls, lots of volcanoes as well as plenty of other sites of natural beauty. You can plan your Iceland itinerary with our useful driving guides, noting the best places to drive for the best views and attractions. We recommend car rental so that you can fit as much into your trip as possible with as much freedom as you like.