How to Drive on F roads in the Highlands of Iceland

Headed for the rugged and beautiful F roads in the highlands of Iceland? Our driving tips will help you stay safe and enjoy your Iceland Highlands tour.

A self-drive tour through the highlands of Iceland can be a great way to experience the stunning, natural landscapes in all their beauty. However, driving the rugged F-roads in Iceland is not to be taken lightly. The unpredictable weather and gravelly, off-road conditions mean it can quickly become dangerous if you are not prepared.

We’ve put together a guide to help you stay safe and to make sure you enjoy the scenery without getting caught in a powerful river or finding yourself stuck in the middle of nowhere as snow begins to fall!

The information in the guide below includes:

Download a printable PDF version of this guide for your trip to the Iceland highlands! 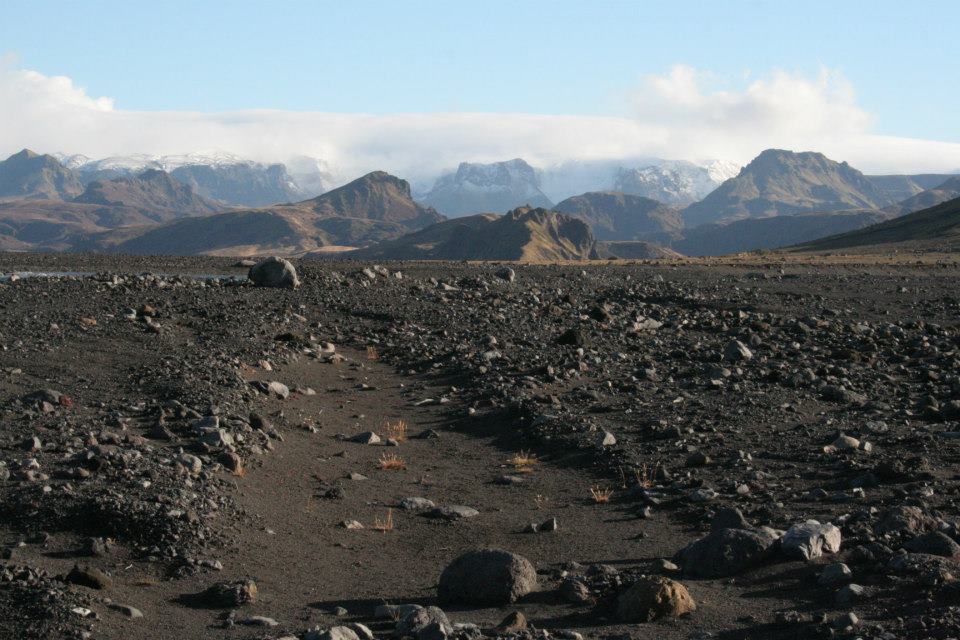 What are F Roads in Iceland?

In order to understand what the F-roads are, you might first hear about the highlands.
The highlands of Iceland are large, sparse zones of volcanic desert which cover a large amount of the interior of Iceland. The rugged beauty and the powerful peace and quiet up there is a brilliant way to recharge your batteries after months of hard work and stress.
The mountain roads in the Iceland highlands are called F-roads and are indicated with an F in front of the number of the road on maps. The F-roads are usually narrow gravel roads with no bridges over rivers. And there are lots of rivers in the highlands!

What can you see in the highlands of Iceland?

The rolling landscape consists of many of the following at all times: black sands, green mountain tops, rock formations of different varieties, blue or brown rivers, colourful hot springs, small waterfalls, big waterfalls and black volcanoes to name just a few. Sometimes you go whole days without seeing a single person and other times it is like being in busy downtown Reykjavik on a lovely Saturday. Iceland’s highlands can offer a huge array of experiences.

The Highlands are home to many of Iceland’s glaciers such as Vatnajokull glacier, which is one of the biggest glaciers in Europe. Most of Iceland’s active volcanoes are also situated in the highlands. Sounds amazing…and kinda scary, right?

Before you travel to the highlands, there are a few things you should take care of first:

How to drive on the F-roads in Iceland

All of the roads in Iceland require extra caution. However, whilst travelling on the F roads in iceland, there are some additional tips that you should follow to help keep you safe:

When are the F-roads open?

The F-roads in Iceland are only open during the summer. Some of them open as late as early July and close again in mid to late September. The opening of each road depends mostly on the amount of snow covering them. Roads can be very wet after the spring and are not open to traffic until they dry up. When roads pass through conservation areas, they are not opened until the whole area is ready to take on the pressures of visitors. This means that the estimated opening dates below are subject to change:
F-Roads Iceland Opening Dates Guide

A map of the F-roads

The Highlands of Iceland have many F-Roads that you can travel on, as shown in the table above and the map below. Many people know of the F35 Kjölur, F26 Sprengisandur and F208 Fjallabaksleið Nyrðri. In the past, Kjölur and Sprengisandur were the main connections between north and south Iceland, and native people would travel the roads on foot or horseback. Native Icelanders must have been super-humans for travelling without all the modern equipment and clothes we have today! 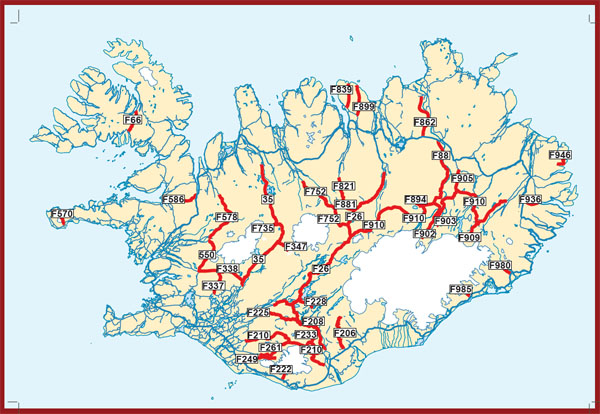 Tips for crossing rivers on the F-roads in Iceland

There are multiple rivers that block the way of the F-roads in the highlands of Iceland. The rivers are often full of debris and sand. Crossing the rivers can be dangerous as you are unable to see their depth and they can flow quickly, which can make it difficult to control your vehicle. The tips below will help to make river crossings safer in the Iceland Highlands:

It’s typical that less water flows in glacial rivers in the morning and warm summer days and heavy rainfall can drastically increase water flow. Some rivers are simply uncrossable, regardless of your vehicle size. If this is the case then you should explore your map and find another route. 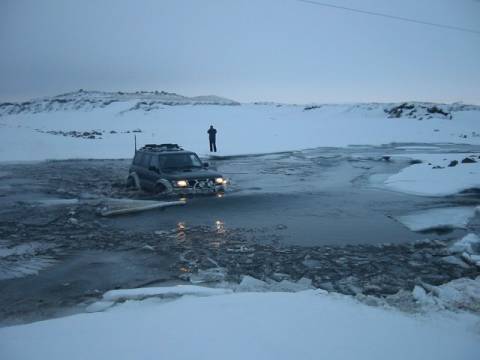 Hiring a vehicle to drive on the F-roads in Iceland

You will need a suitable 4x4 car to drive in the Iceland highlands. At SADcars, we offer several groups of vehicles that are suitable for F-road driving;

The notable exception to the 4x4 requirement is Kjalvegur road 35 (usually called Kjölur among Icelanders). Kjölur does not become an F-road until right after Gulfoss, which means you are able to drive to and from Gullfoss in a standard car.

It’s important to note that regardless of your vehicle, driving off-road in Iceland is strictly forbidden. It can cause lasting damage on the landscape if you drive on roads without assigned numbers. Punishment can include huge fines or even imprisonment for up to 2 years.

Hopefully, this blog gives you some ideas of what to expect when travelling on the F-roads in the highlands of Iceland. Always keep in mind that you are driving in a wilderness where the weather can change very quickly. You are located high above sea level so the weather can be very different from the weather in the "lowlands". For more information on how to be safe in Iceland, read our advice on navigating the dangers of Iceland’s roads.

Have a happy and safe journey!